It was the Great Depression but luxury cars were still king.  Not only in size and style but also in technology.  Not to be left behind, Cadillac introduced its multi-cylinder engines, both V-12 and V-16, in 1930.  Cadillac declared in its advertising, “Leadership Rests on Achievement.”  By 1933 when a quarter of the American working population was either unemployed or underemployed, one could purchase the epitome of General Motors luxury, a Cadillac V-16 sedan such as Mr. Vanderbilt’s, for $6,500.  This was at a time when the average American’s annual income was $1,500.  Although Cadillac advertised, they would build only build 400 units, it would come to past only a mere 126 ‘Sixteen’ chassis made it into public hands.

A luxury motorcar like this was designed for an upper-crust clientele, such as Fredrick William Vanderbilt.  He purchased a new custom bodied Cadillac ‘Sixteen’ in 1933, only fitting for a railroad magnate as himself.  This Cadillac utilizes the marques’ longest chassis with an immense 149-inch wheelbase. It would be the 88th ‘Sixteen’ chassis built for the 1933 model year.  It features a formal sedan of the Fleetwood series designated as body style no. 1530.  It would be the fourteenth body of this style built for the 1932/1933 model years and the only one mounted on a ‘Sixteen’ chassis in 1933.  It has been recorded to have been shipped to the Vanderbilts on June 30th of 1933.

The 1933 model year was a transitional period for Cadillac styling, from the previous rigid and sharp angled aesthetics to more streamlined and curved styling cues.  Although it represented just a fraction of a corporate giant, the Fleetwood name was applied to top-of-the-line custom bodies with unique styling features, customizable to the purchaser’s taste.  The Fleetwood/Fisher Body Division of General Motors penned these stately bodies, trading on Fleetwood’s prestigious name. This formal sedan for Mr. Vanderbilt includes a divider window with leather roof and decorative landau bars.  Mr. Vanderbilt also added the optional chrome wheel disc covers, at $12.50 each.

The Cadillac Sixteen was one of the most advanced engines of its day. Both in number of cylinders and sheer size, the engine represented mechanical innovation, power and status. In a world of flat-head engines, it featured overhead valves and hydraulic valve silencers. The engine was rated at 165 horsepower out of an immense 452 cubic-inch engine, able to propel a two-ton car up to 80mph.As a multi-cylinder engine, it is inherently balanced, allowing smooth and unnoticed operation, a perfect powerplant for transporting the rich and powerful, like Mr. Vanderbilt, who enjoyed the ride for the remaining five years of his life 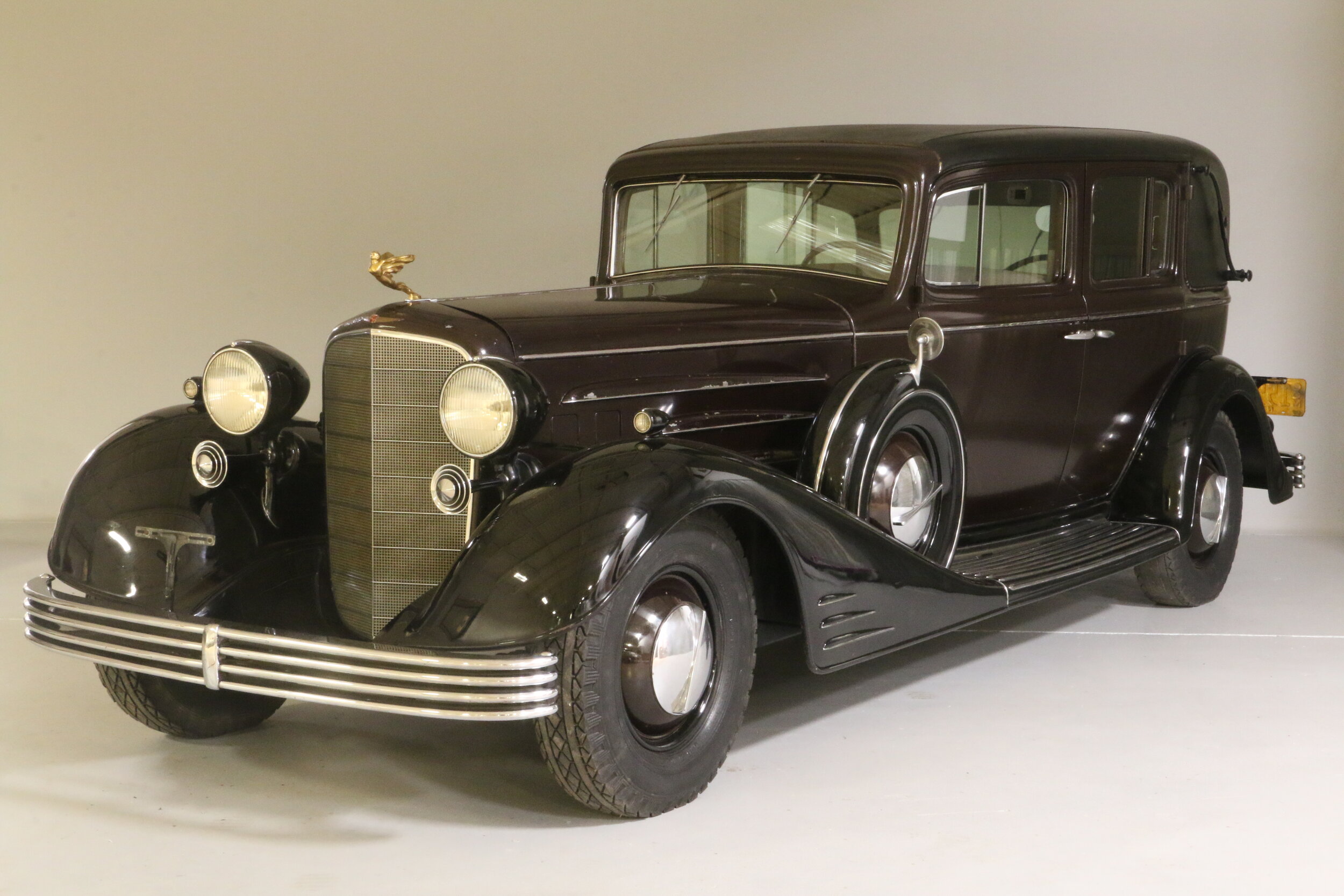 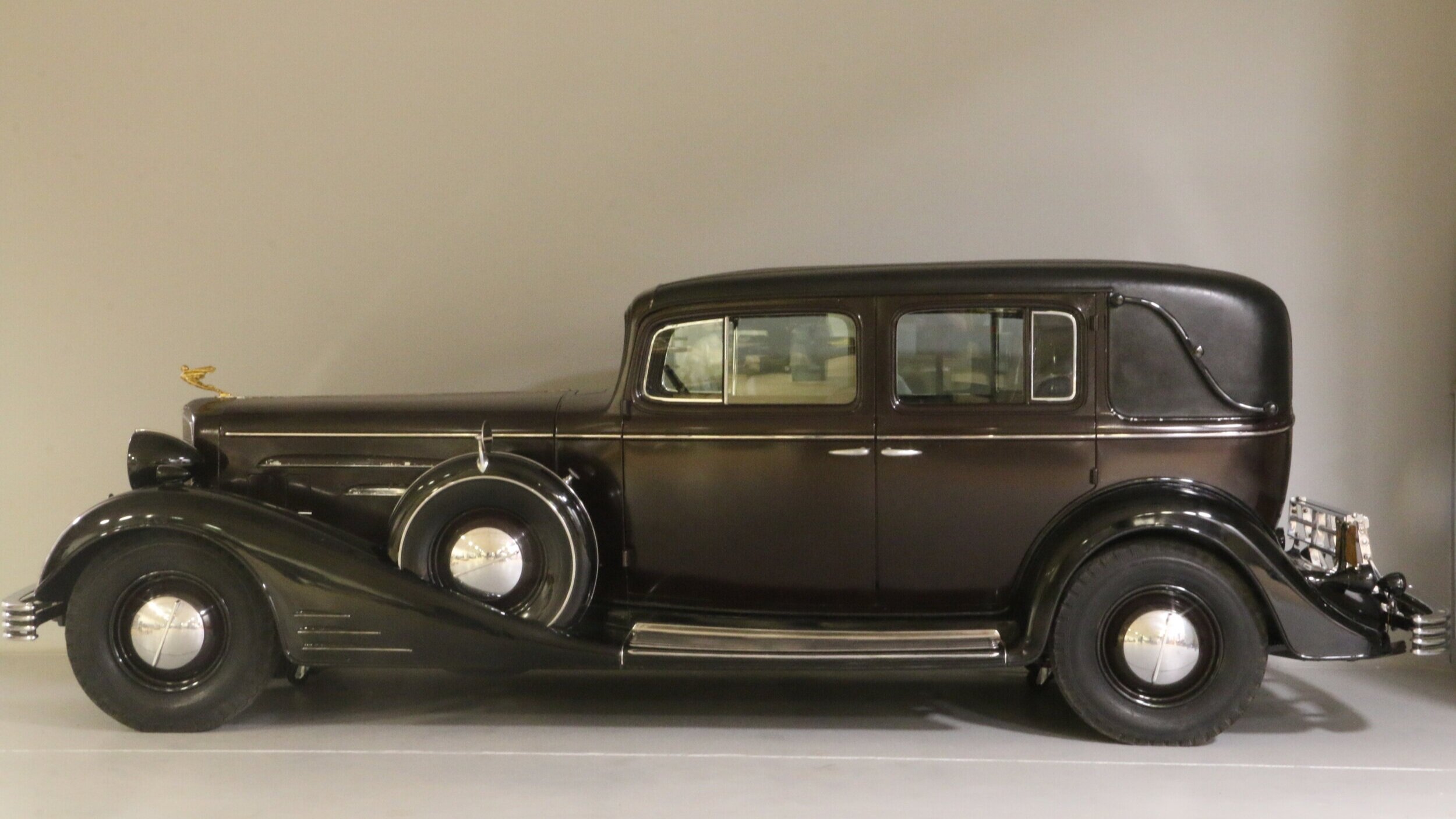 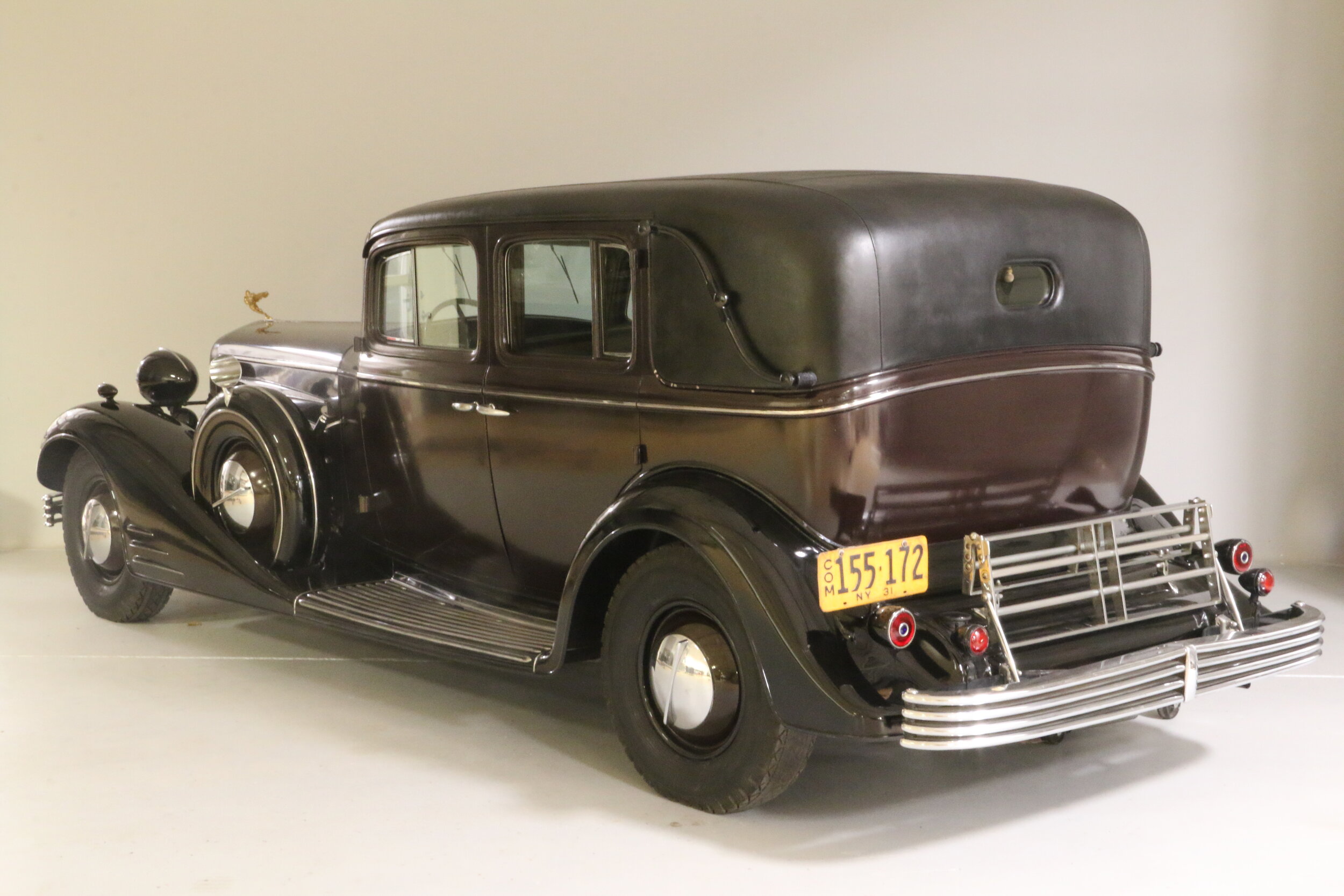 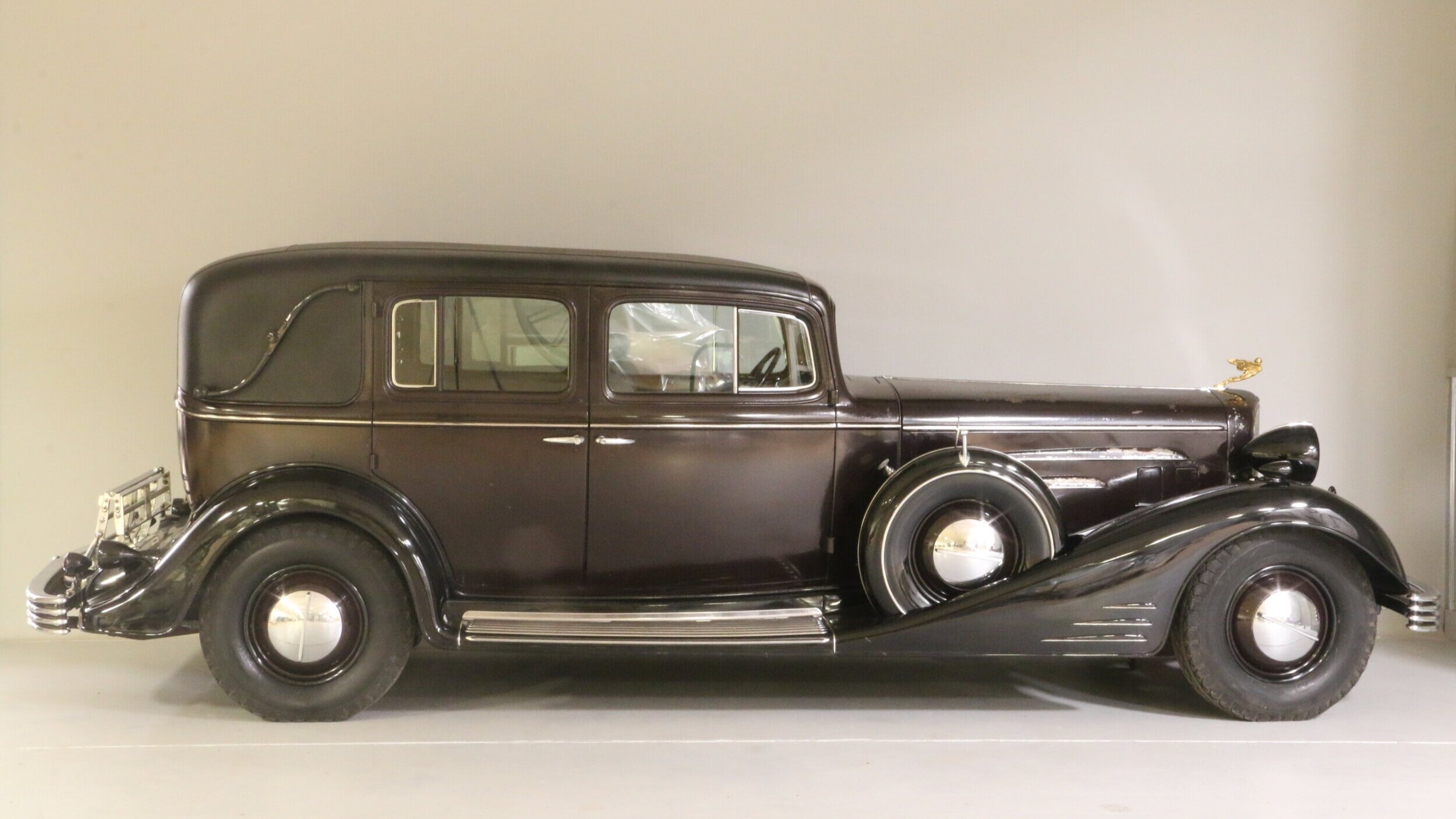 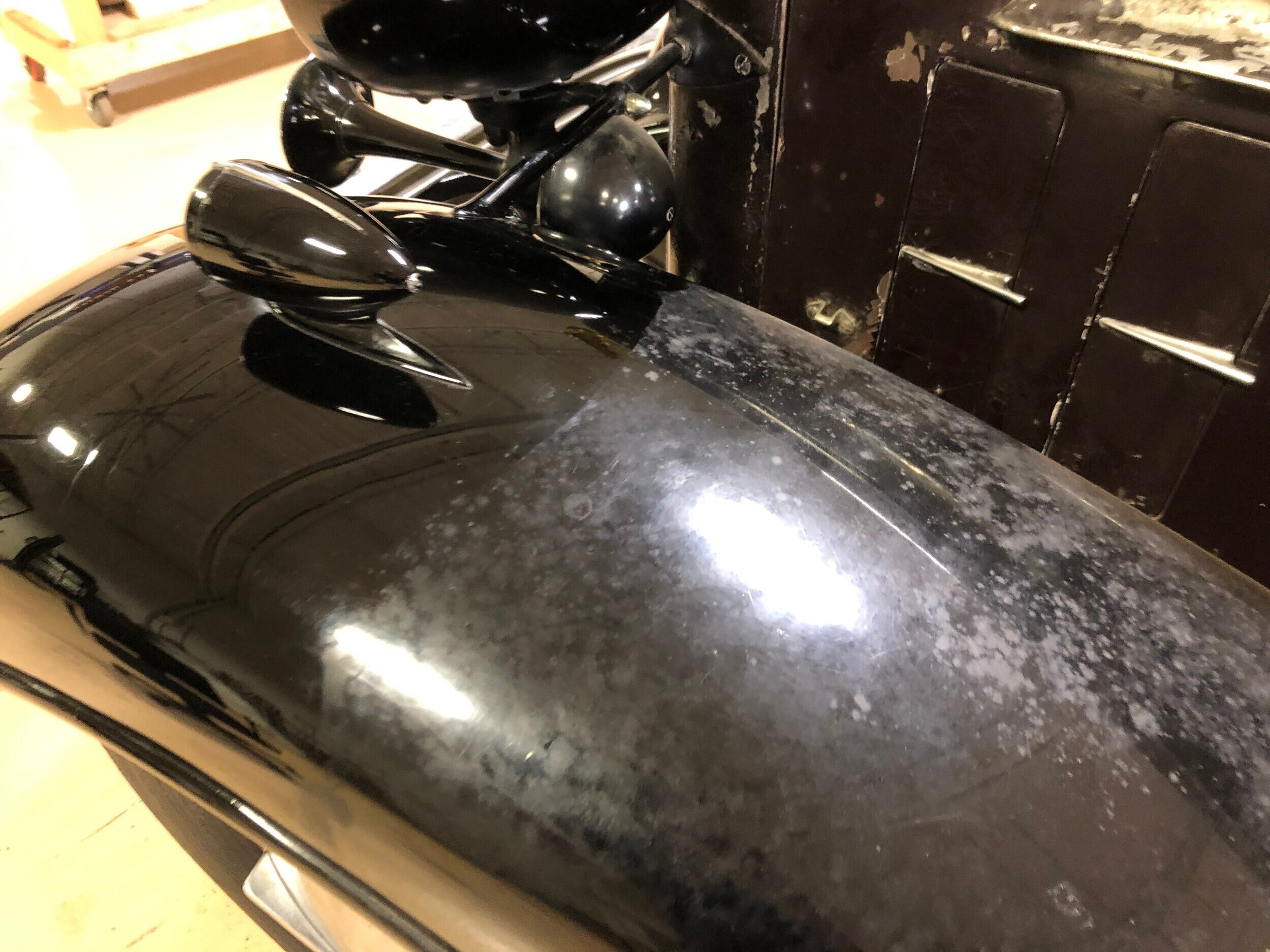 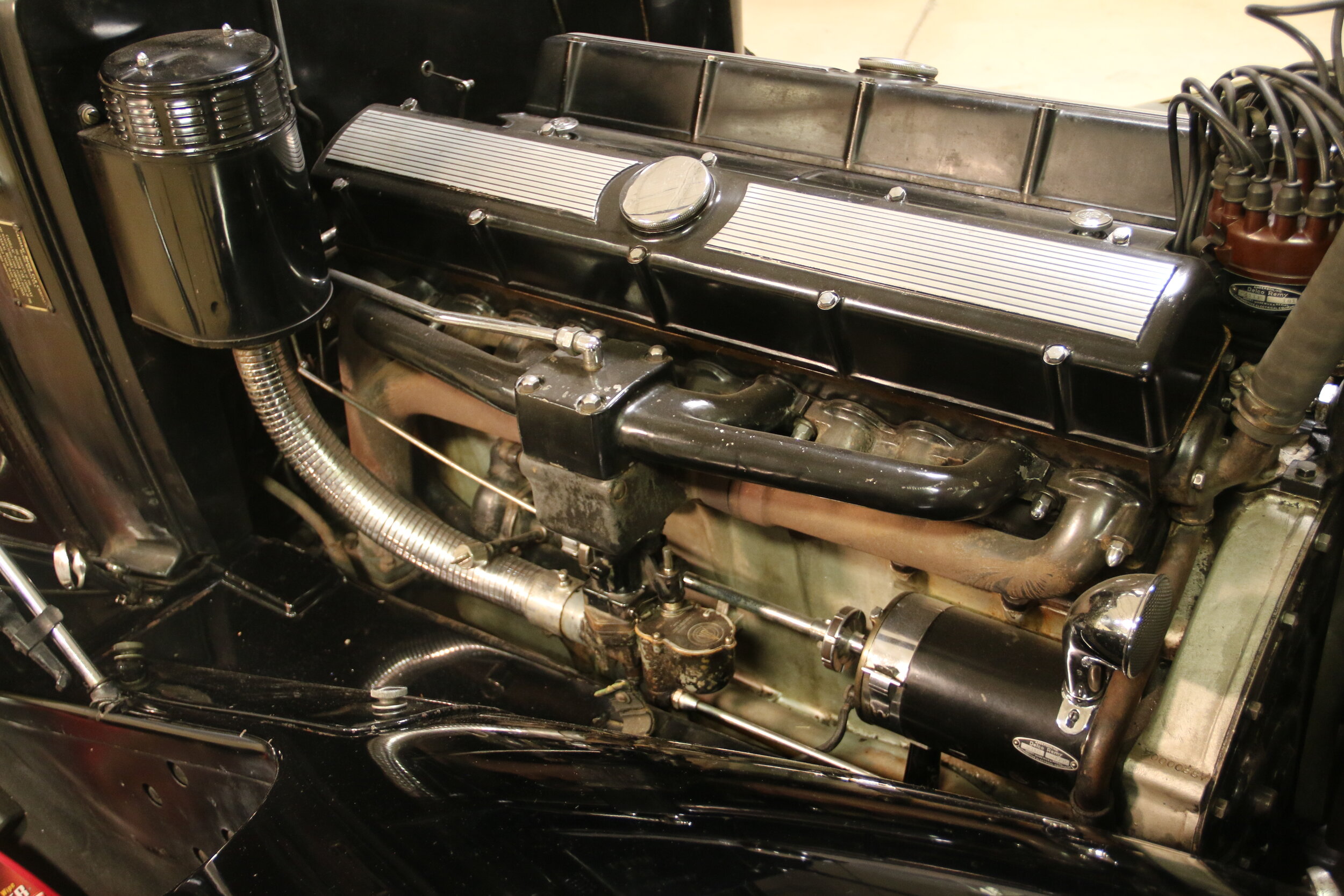 B.R. Howard was contracted by the National Park Service Vanderbilt Mansion National Historic Site to conserve their collection of vehicles. The 1933 Cadillac arrived at our studio and was extensively documented and photographed. Paint samples were gathered and sent for microscopic cross sectional analysis. The photomicrographs revealed that the vehicle had previously been repainted once in the same color.

Areas of lifting and tenting paint were locally consolidated and re-adhered to the substrate. The engine, chassis and components were covered in a heavy accumulation of dirt, grime, and hardened oils. Surfaces were thoroughly cleaned using dry ice blasting, solvents and mechanical methods in areas that were more inaccessible. All active corrosion were mechanically reduced before chemical stabilization coating applications were applied and the decorative metals were polished, degreased, and lacquered.

The interior textiles were cleaned using a rheostat controlled HEPA-vacuum, before small tears were stabilized.